Welcome to my blog

Posted on October 26, 2020
ANZEIGE
Articles identified as ‘Anzeige’ means, that I have purchased the exhibited product myself or I have received it free of charge for product placement from a company.

Our first contact with Laconian Mani was several years ago, in the form of a going through route, at the end of a trip.

And yet, the impression was strong even though it was winter. The landscape looked wild, isolated, imposing, mysterious and at the same time absolute.

It was a call to return here soon, in an exploratory mood.

So we decided to dare to do it, this summer. Our starting point is the beautiful Gythio, the naval base of the Spartans in ancient times and one of the most touristic places today. Its neoclassical architecture testifies to the glamor of past years and its amphitheatric location overlooking the Laconian gulf are elements that enchant the visitor, at first sight. 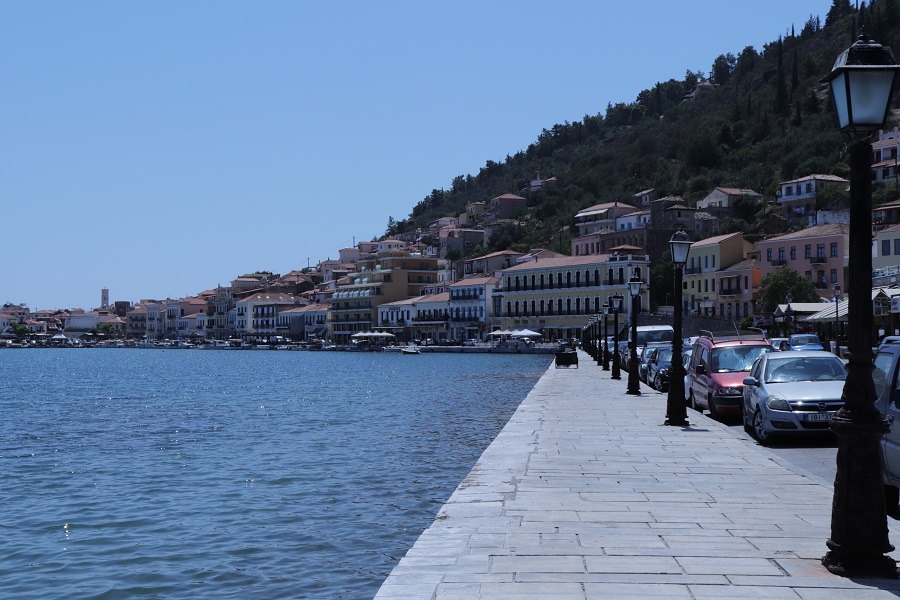 There are many options for entertainment, food and accommodation in Gythio. Our favorite sandy beach nearby, is Valtaki. Its features are the shipwreck DIMITRIOS and its length.

In my opinion, its great asset is that it is not organized, but nevertheless there is the coffee restaurant Glyfada on the edge of the beach where you can enjoy your food or your coffee. 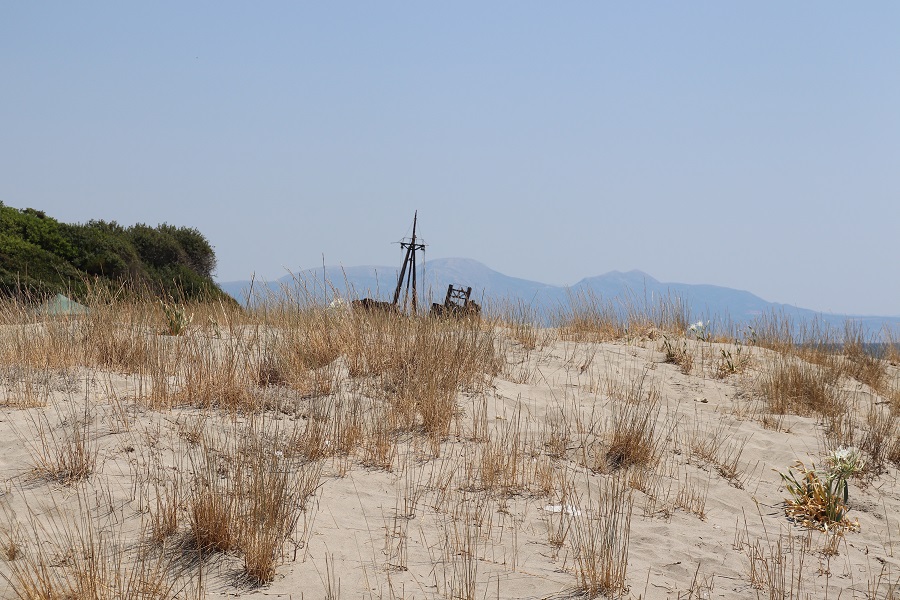 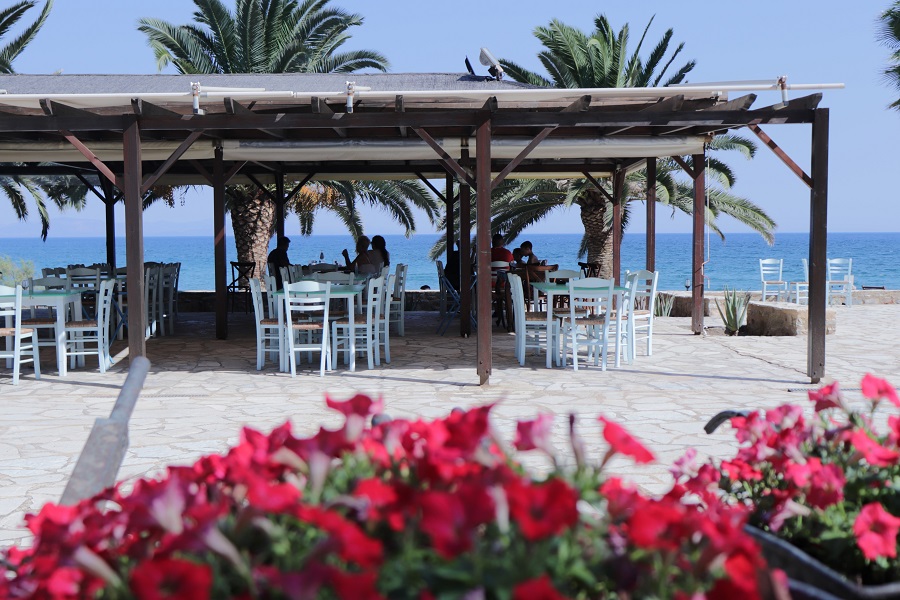 Other nearby and beautiful sandy beaches  are Mavrovouni and Vathi.

A visit to the beautiful Areopolis. It is only 26 km away from Gythio, it is  considered a protected settlement. Its protected buildings take you to another era. The bougainvillea in the courtyards and the stone buildings, give it a unique air. In Areopolis, life flows at an intense pace and its picturesque alleys are full of people. You will find many cafes, bars and restaurants in the area. 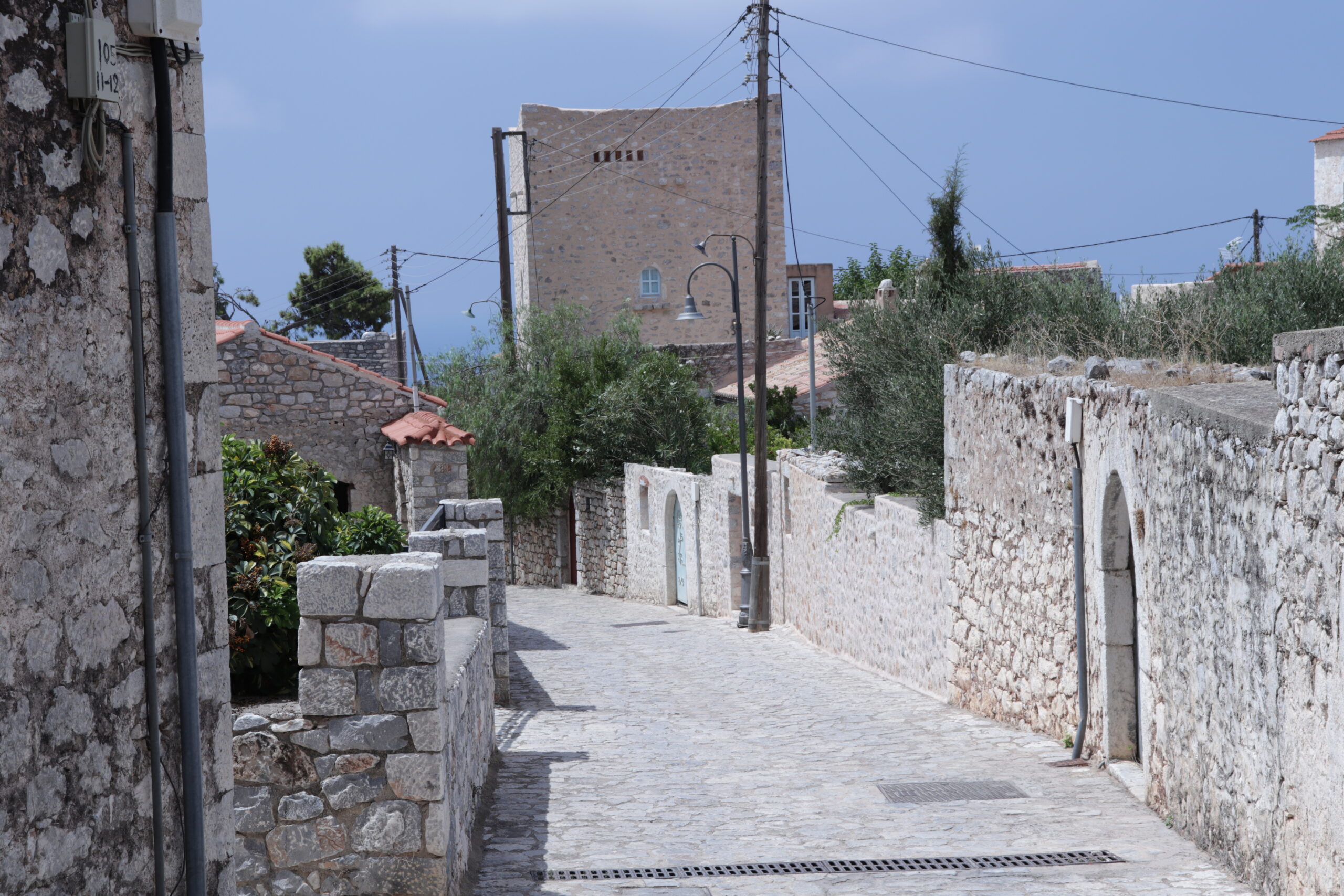 We left the visit to the nearby port for another day and headed south. For most of the route we drove in parallel to Mount Sangias which is considered the natural end of Taygetos. Its wonderful gray color as well as a mixture of earth colors create such an image, that you are wondering for a moment in which country you are. It is really something exotic. Only the olives and the white churches bring you back to reality. 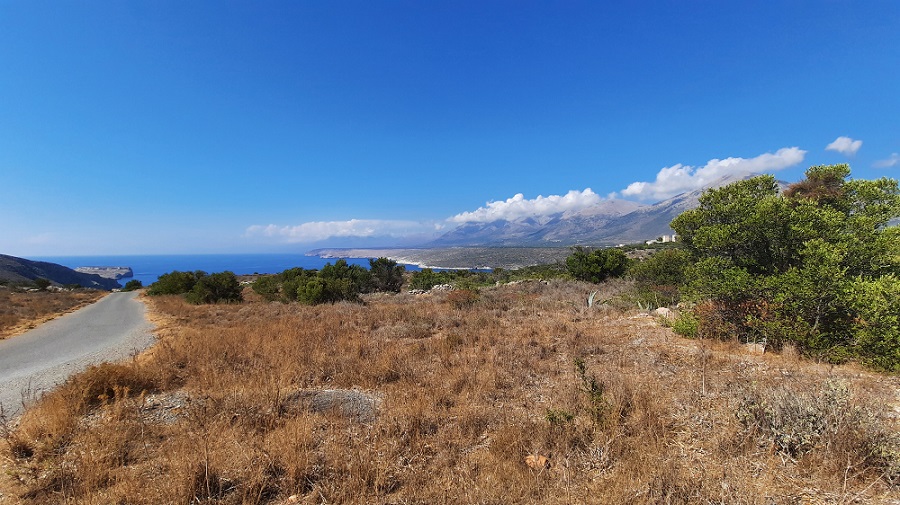 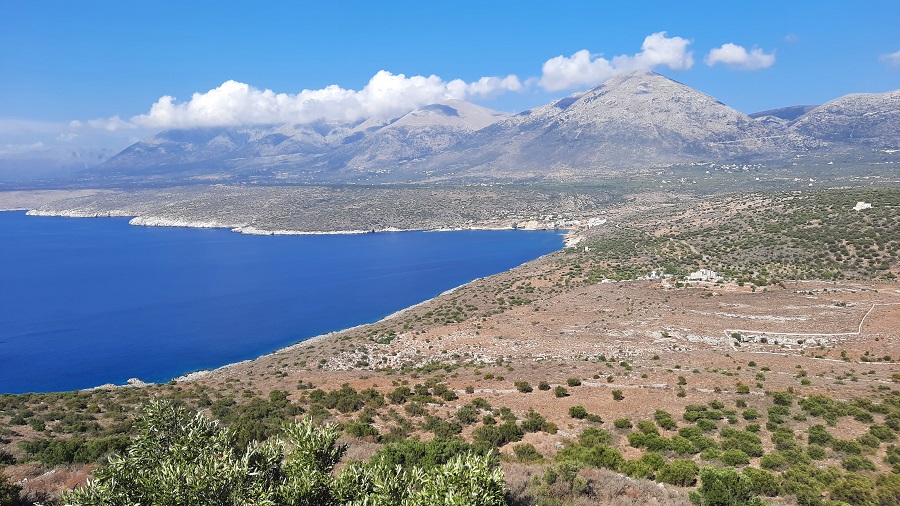 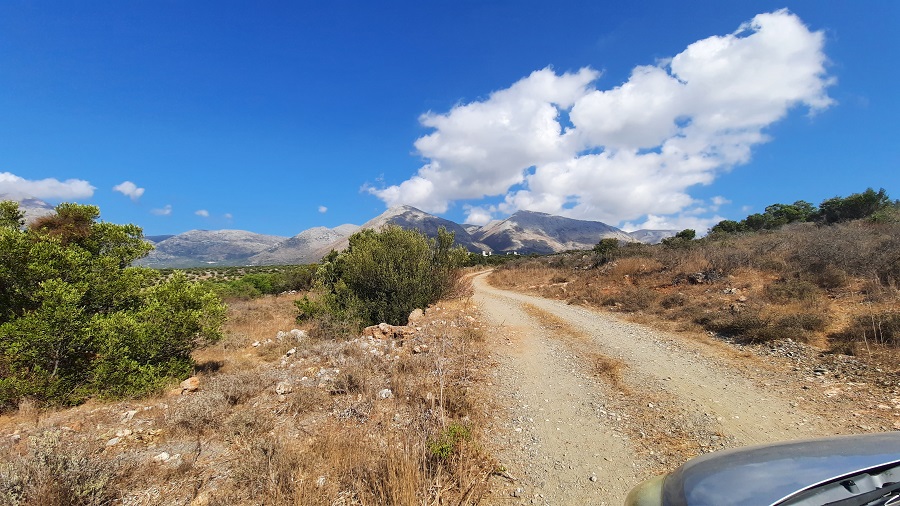 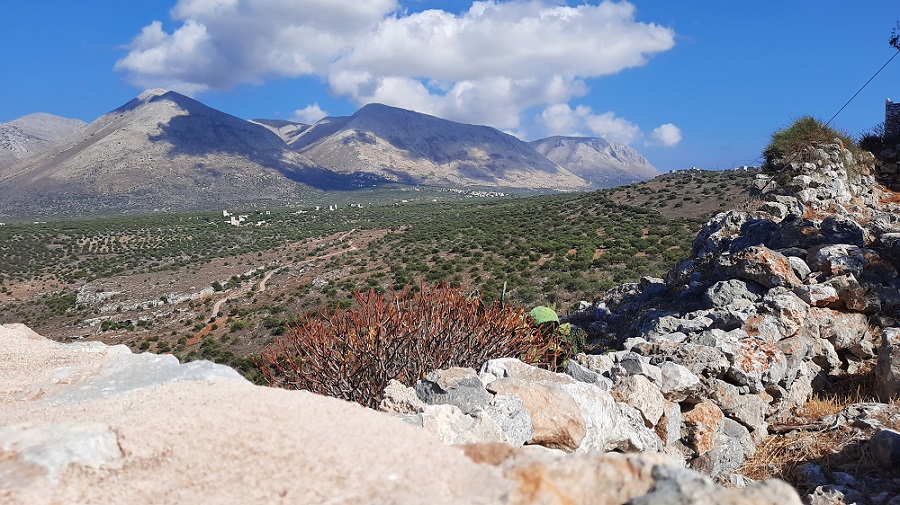 Arriving at Mezapos we decided to take a dive. We left the car on a plateau off the road and followed the descent to the sea. The beach so tiny with only 3 groups of people all in all. The landscape magical. The settlement is built in Ormos Tigani on a rocky location between two streams. The blue-green waters and the white pebbles, sparkled next to the dark color of the rocks. 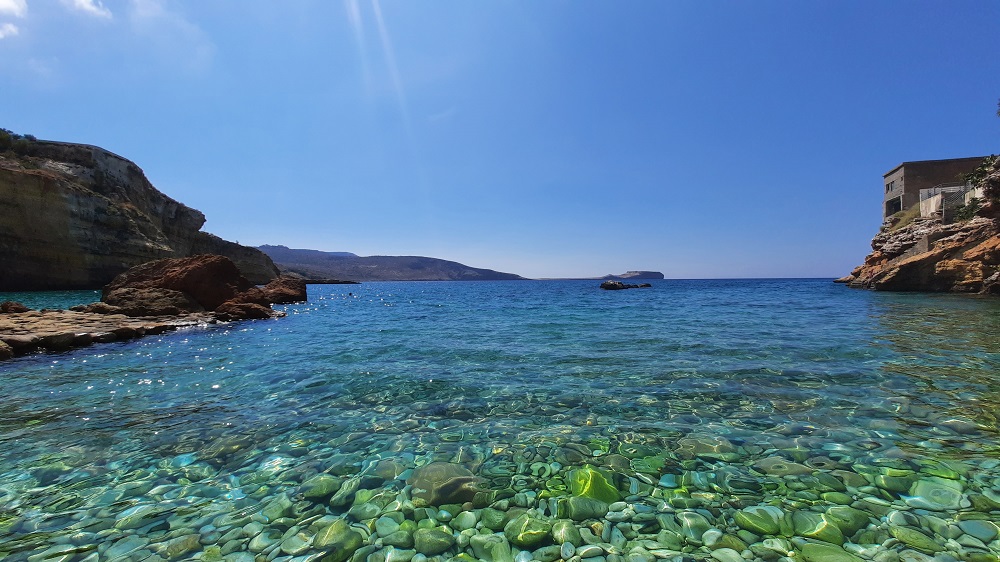 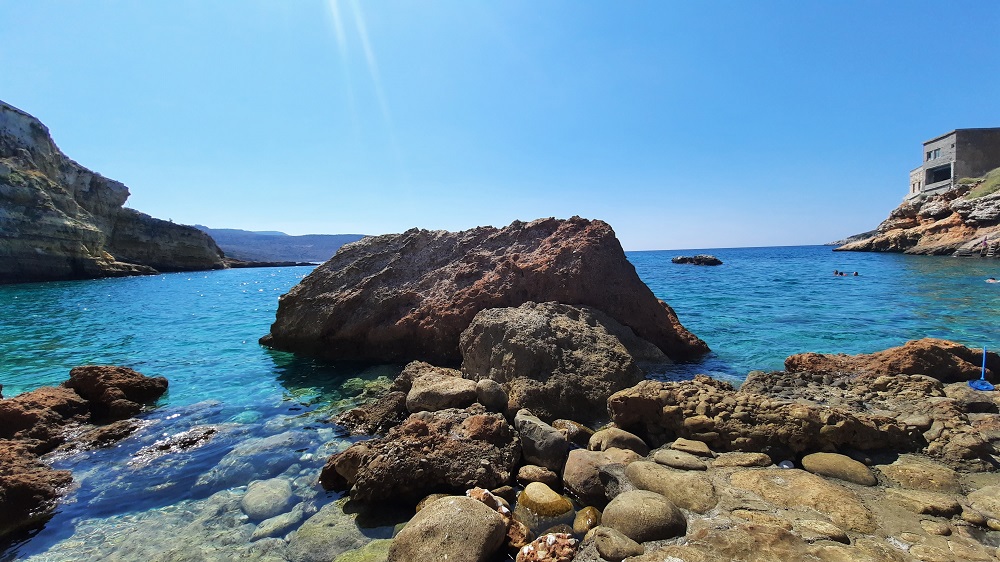 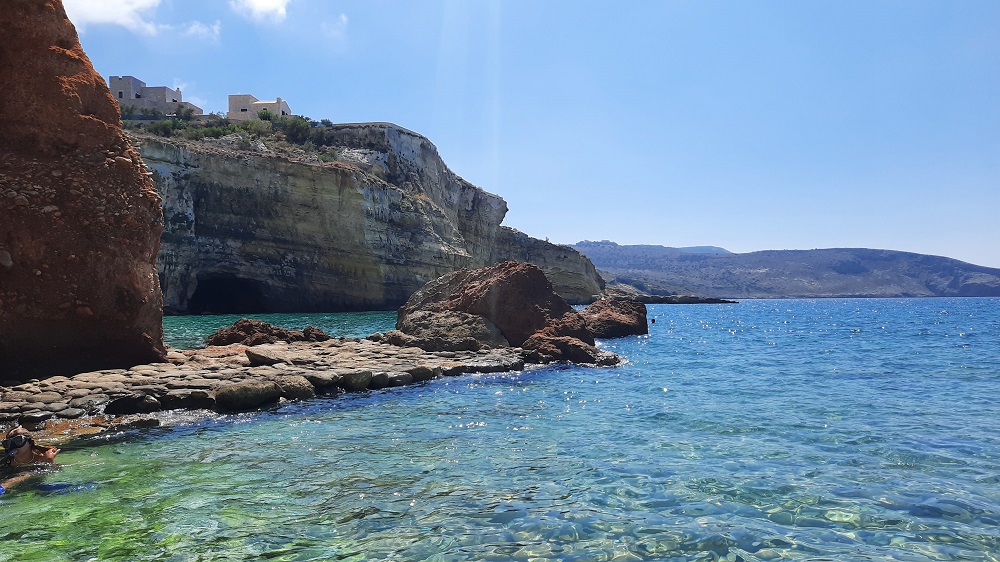 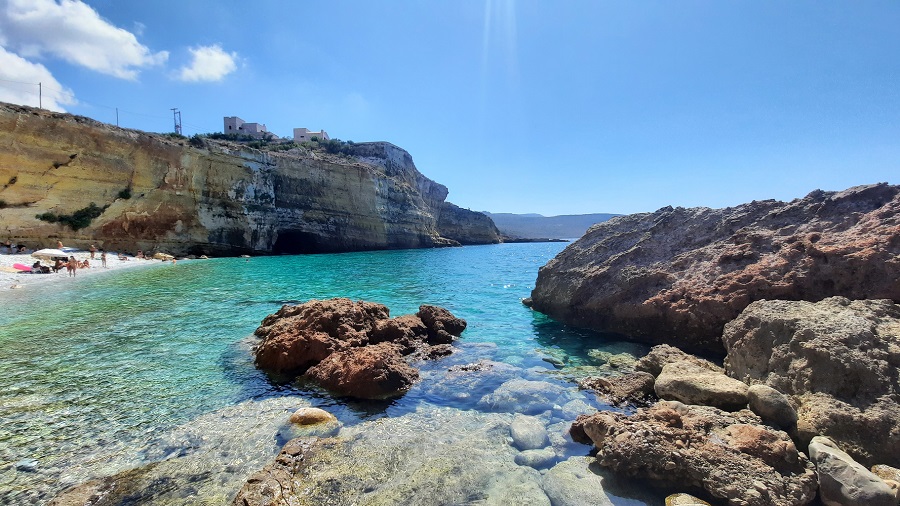 With our batteries full, we decided to continue on the provincial road to the south, passing the settlements of Stavri, Agios Athanasios, finally reaching Gerolimenas. A picturesque seaside settlement with traditional buildings which was once the stronghold of the Mani pirates and later a local commercial center. Arriving at the municipal parking lot, the smell of fresh fish being grilled sharpens your nose. You should not leave unless, you visit one of the seaside taverns. 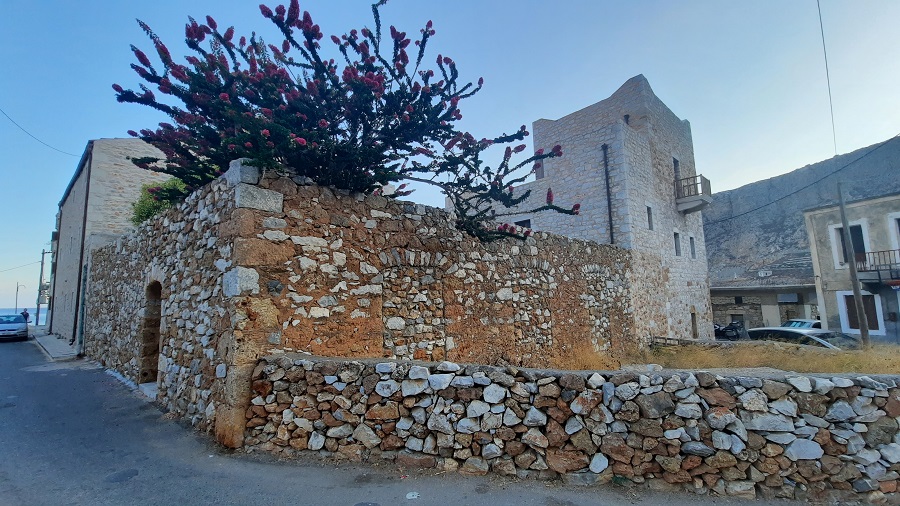 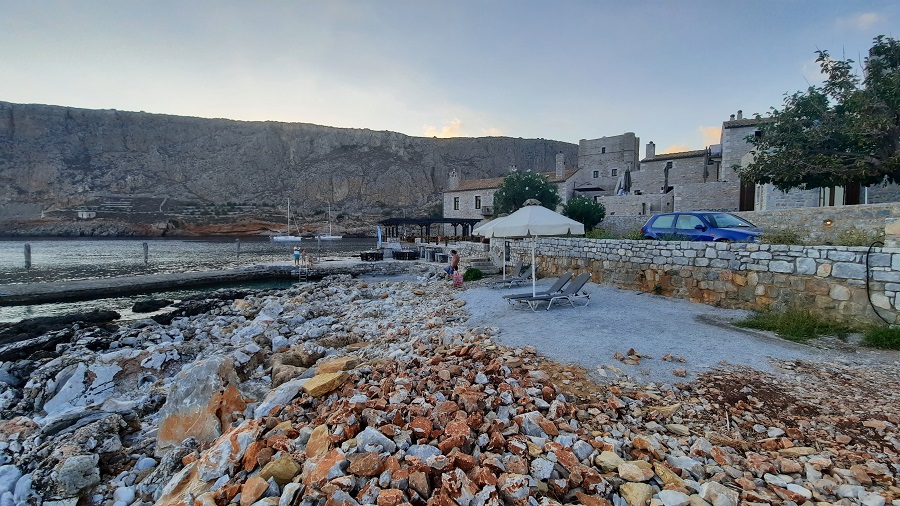 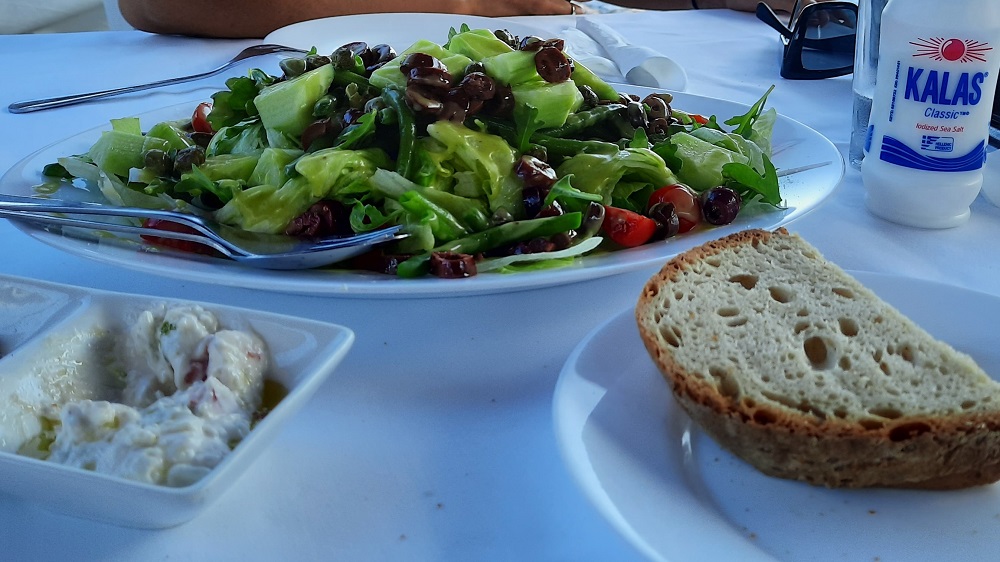 We decided to take a tour at the part of Mani, in the Laconian Gulf. The road was relatively good and the route really compensates for you. This route is quite different from the previous one. Almost, throughout the way you have visual contact with the sea. We took the road Gythio-Areopolis and headed to the first settlement, Skoutari. From that point on, we visited the settlements: Kotrona, Alypa and Kokala. 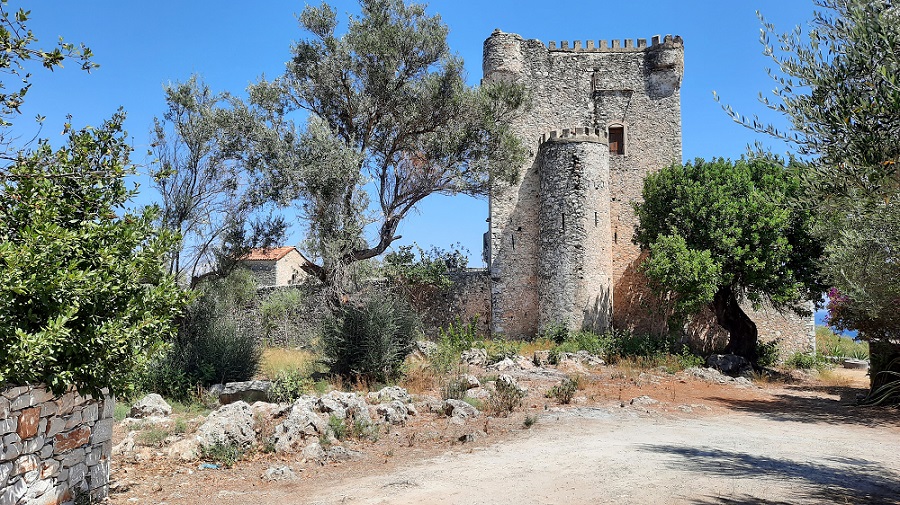 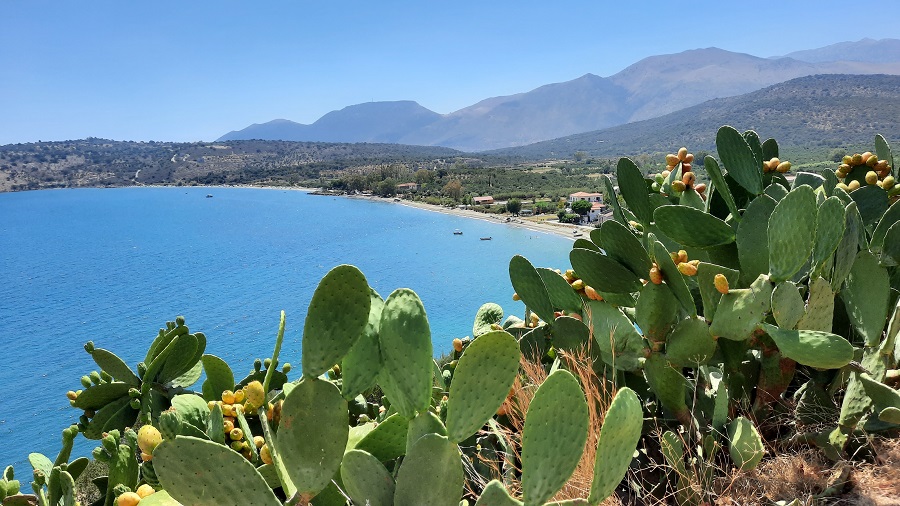 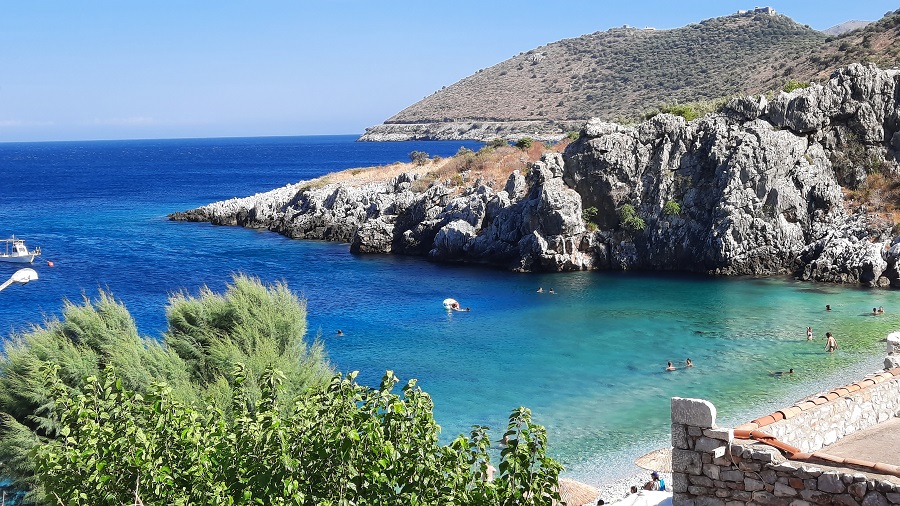 All the settlements have something unique of their own but Alypa is a special jewel of Mani with its stone turrets, its turquoise waters and its white pebbles. 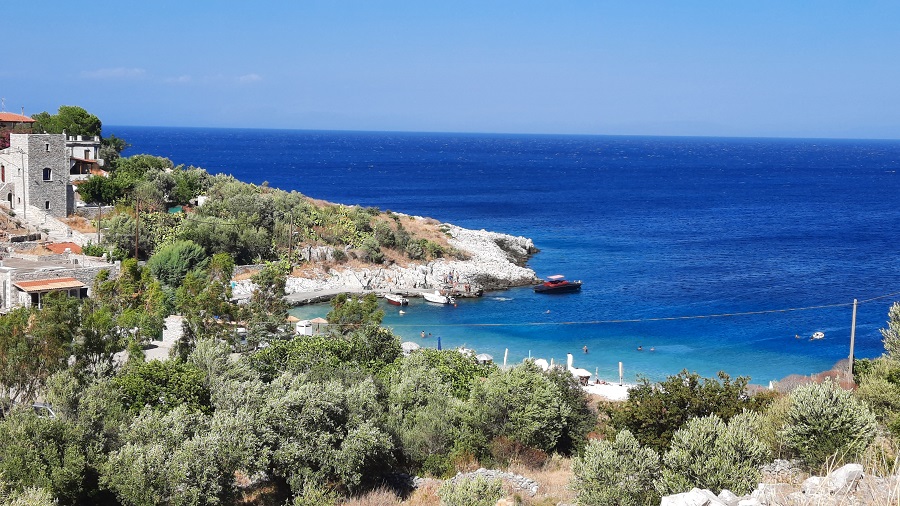 From this point on, the road moves away from the sea but the landscape still enchants you with its wild and imposing beauty. In the next visual contact with the sea, you feel a shock and genuine awe towards the beauty of nature. 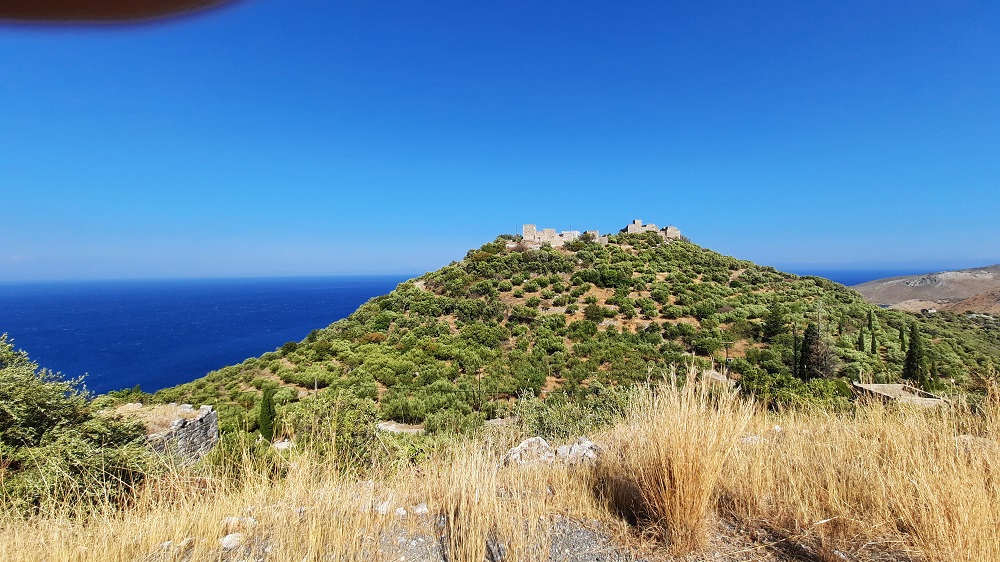 You meet the southernmost point of Europe, Cape Tainaro. From high above in the east you see the port of Cayo and in the west Marmari while straight in front of you, your eye is lost in the vastness of the blue of the sea. Cape Tainaro dominates in front of it, while rumors say that the Ancients placed the gates of Hades here. 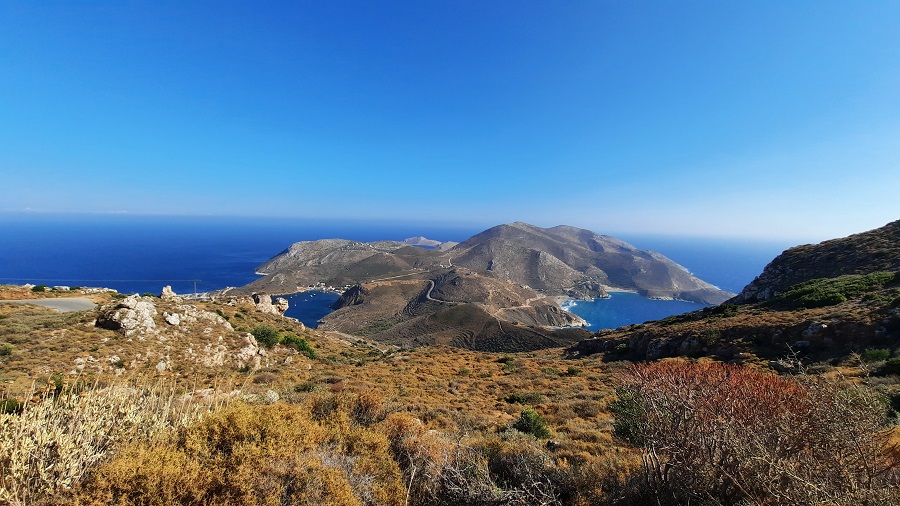 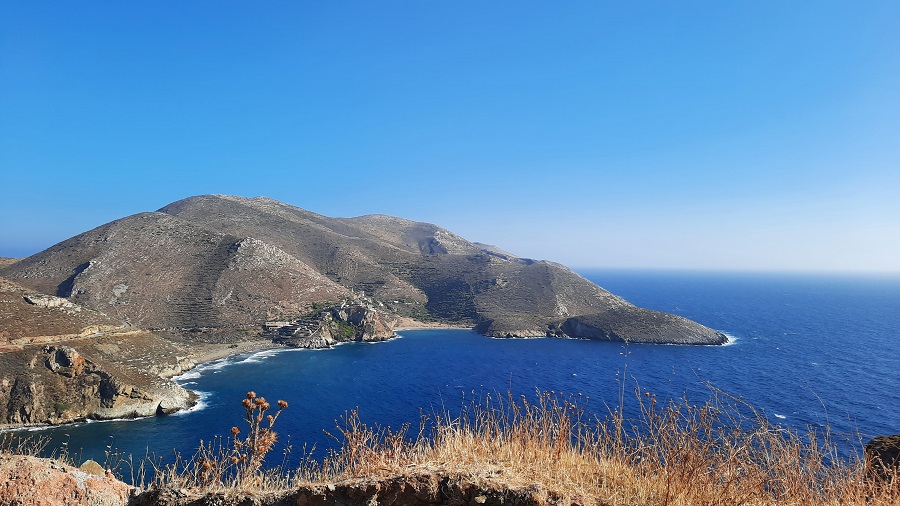 We continued our journey to Vathia. There, between the turns and having the sea on our left, Vathia emerges in a turn, on the hill. Like an imposing noblewoman Vathia stands high above, gazing at the setting sun.

Its location unique. Time colors it uniquely, as well.

Its characteristic is the traditional stone tower houses that blend perfectly with the rocky landscape.

Its silence is so infinite but also its calmness. For a moment you think you are alone in front of an uninhabited settlement. But this is also its unique beauty which can not be captured even in the best photo. 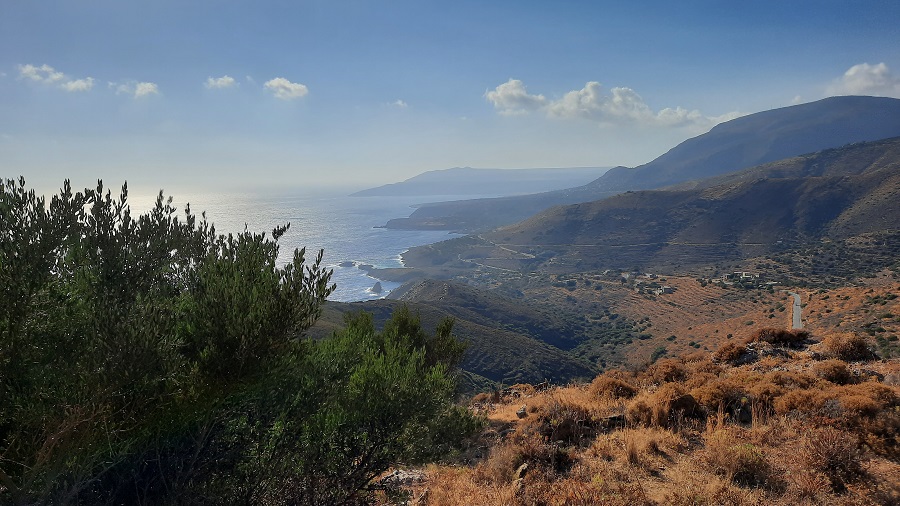 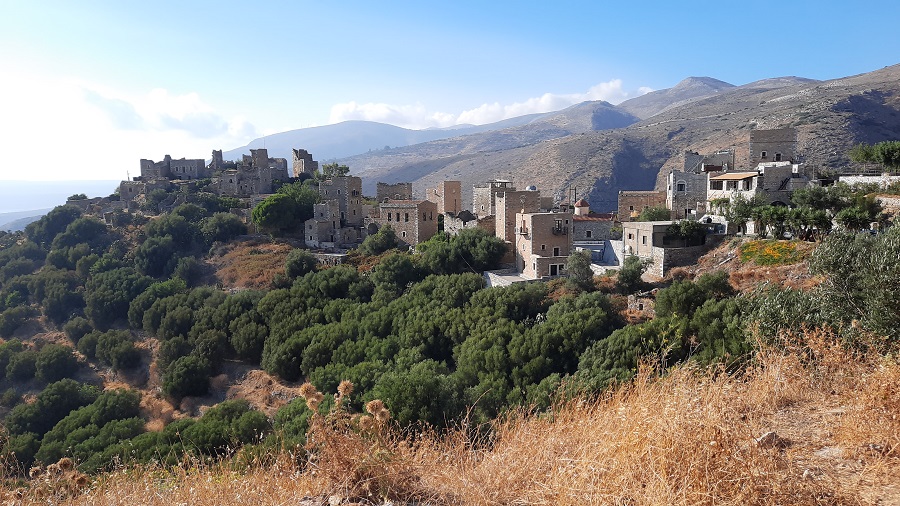 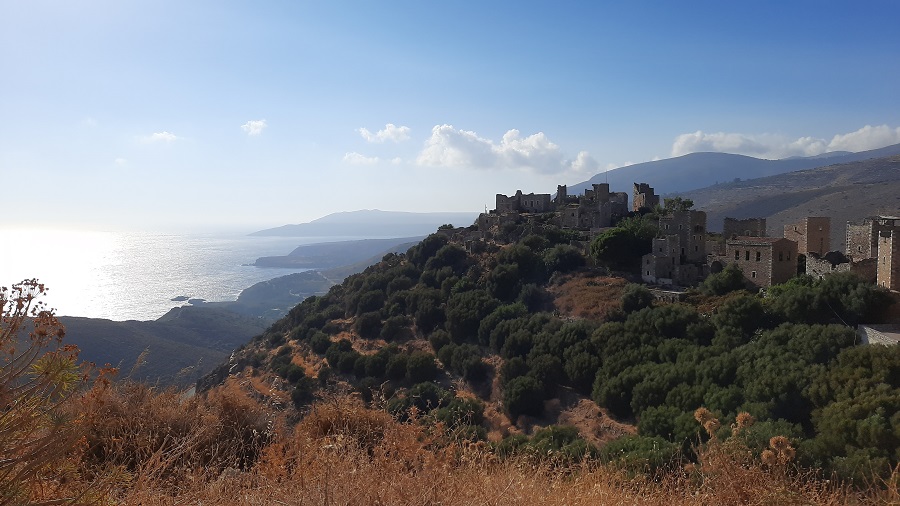 What else to see after that, having feasted on beauty, we continued on the also beautiful route to Gerolimenas where we would once again enjoy our fresh fish by the sea.

On the third day we decided to relax and visit the nearby Limeni (27km from Gythio) and the cave of Diros. Two very touristic places that you have definitely read or heard about. This would close the Laconian Mani chapter.

Limeni is the seaport of Areopolis and if you decide to visit it, you have to park on the side of main road before you reach the settlement.

But the area compensates for your inconvenience, with what you are about to see. A very beautiful picturesque settlement. Bougainvillea spreads on the stone houses and vividly paints the atmosphere. Cafes, bars and restaurants offer stunning sea views. Here in contrast to the quiet of Vathia you are in a lively tourist area. 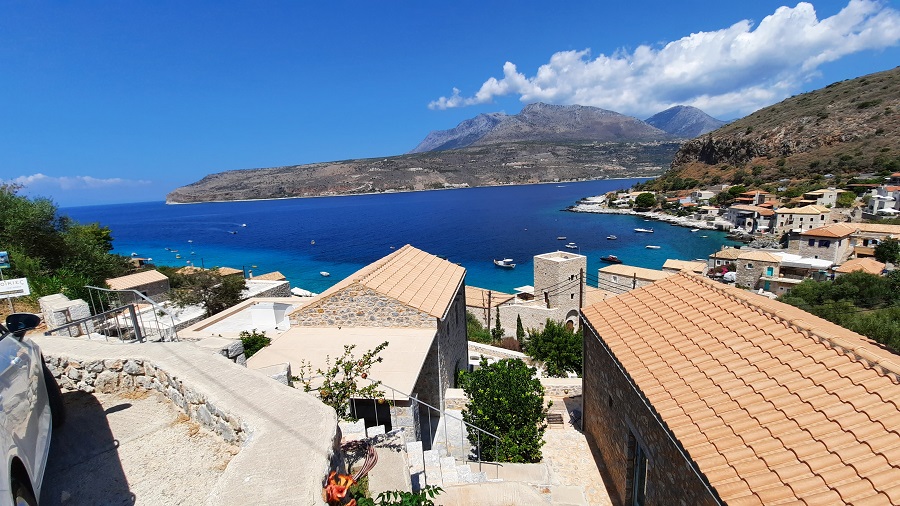 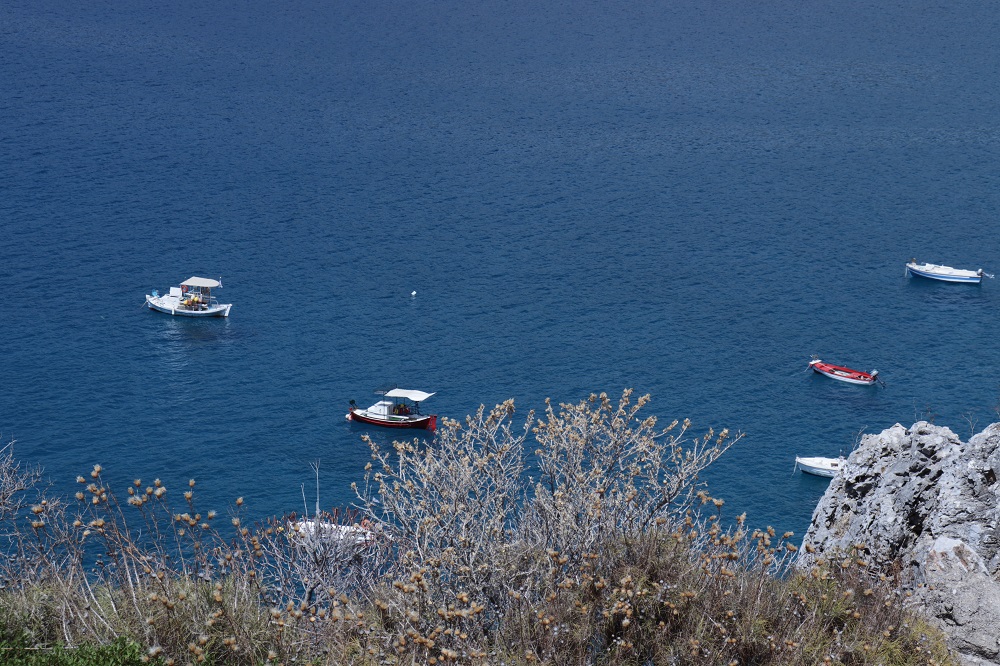 Limeni is located on rocky ground and therefore has no sandy beach. We chose the beautiful Karavostasi for our last dive.

Unfortunately we did not see the caves of Diros because the waiting was long. Maybe on a second trip because it is really worth it.

Finally, what really enchanted us is this unique equation of Sun-Stone-Sea which you perceive on every route. The settlements are many and beautiful but the route to them is actually the unique essence of this trip. 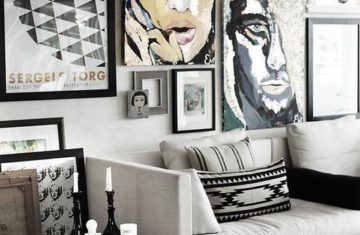 WALL GALLERY : ADD A PERSONAL TOUCH TO YOUR SPACE

The word «house» is all inclusive. Our house is our refuge, the space where we share…

END_OF_DOCUMENT_TOKEN_TO_BE_REPLACED 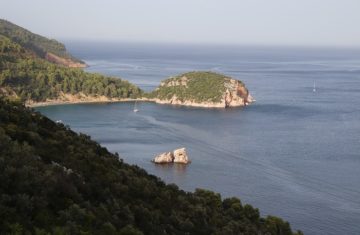 Before the Mamma Mia film, only a few knew about this gem. After the shooting of…

END_OF_DOCUMENT_TOKEN_TO_BE_REPLACED

Thank you for your visit!